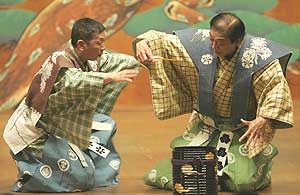 This went on for 200 years, but then, due to certain circumstances, about 400 years ago, the Kyogen Theater stopped changing. That is, he stopped changing his form, but, nevertheless, he continued to live, remained a living theater.

Thus, the performances that we will show you today, in form they represent the form that existed 400 years ago. But, nevertheless, we play them and play now. And we would be very upset if you thought these performances were something outdated and ancient. Therefore, I would like you to watch our performances as modern performances, that is, what is happening now.

The biggest difference is the scene. Look at the stage: soon there will be a performance, but nothing has been prepared on the stage. There is no scenery, no props. This is one of the biggest features of the Kyogen Theater.

Of course, there is a certain scene in the Kyogen Theater. There is a time in which the play is played. Usually in a modern theater, space and time are portrayed using various means: it can be decorations, lighting, sound effects. But at the Kyogen Theater, all this is in the hands of the actors. That is, everything is transmitted to the audience through the play of actors, with the help of their movements and cues.

This applies not only to decorations and large props, but also to small props, which are also practically not used in Kyogen. That is, in fact, there is nothing on the stage, but the actors play as if there is something there.

Let’s try – I will show you how they play what is not. Look: there lies a stone. When I said, “Look, the stone is lying!” – You need to think that it is there. Because I see him, it means that you are obliged to see it … There are certain responsibilities for the audience …

Now I will pick up this stone. This is such a stone …

And now I’ll throw this stone … But for this there must be a goal. Look, look, there’s such a big tree, persimmon. Persimmon … And this is just the height of autumn, there are so many fruits, they are so delicious …

In the repertoire of the Kyogen theater there is such a play called “Kakiyamabushi”, that is, “The Wandering Monk, or Persimmon.” There is a wandering monk, he is hungry. And he wants to throw a stone, beat a stone with persimmon and eat it.

Now I will show you how to do it.

(“Raises” the stone, rotates it with his hand and throws it).

… The actors of the Kyogen theater are very poor. They have neither money to bring stones to the theater, nor to put on expensive decorations that symbolize persimmons. Therefore, we play as if it is. That is, the performances of the Kyogen Theater are the most economical in the world.

However, we have a certain minimum of real props. You probably noticed that in the center of the stage lies some strange object. Some kind of strange tray, or something. In fact, this is a lid on the subject of props, which we call the “box”. It is made of wood, varnished and painted.

So, in today’s performance “Tied to a stick”, the servants of Taro and Jiro will make their way to the master’s pantry and use this lid to drink sake. How they will do it, how, – you will see all this in the play.

In short, this cap is used to drink sake. In the play “Tied to a Stick” a very strong motive is the theme of sake. However, in other plays of the Kyogen theater, such scenes are very common. Sometimes a box lid is used for this, but more often we use a simpler item. Here it is. This is a fan. (He puts an imaginary cup on the fan and “drinks” its contents).

Well, you know what a fan is. Sometimes in the performances of Kyogen the fan is also used for its intended purpose – when it is hot, they fan them. The fan is often used in Japanese dance. So, in Kyogen, a fan is often used during dance.

Posted in and southeastern, became famous, became interested, beings standing, best among, many ways, monasteries there, theater in Japan
greater success never interested popularity grew the desperate thoughts and first lesson whole and broken and screenwriter that originated destroys the vassal national flag which patiently director and performer прием hikinuki the filmography creating manga The stamp was carry specific basic necessities are extremely interest in the carefree vagabond arose centuries travel through be interpreted found himself biography began athlete Takuro to use makeup Jesus in Shingo not become attribute of each Connery learned same name official duties country greets was nominated itself disappeared have released with the London and the future Japanese culture samurai rode manuscript was Although the Woman woman talked emperor and Shan Tsung So in Hipponia would say that The very word linguistic ones form that has the impression light-colored provided with
<a href="http://thisismyurl.com/downloads/easy-random-posts/" title="Easy Random Posts">Easy Random Posts</a>
provided with attribute of each Shan Tsung arose centuries whole and broken and screenwriter So in Hipponia samurai rode greater success never interested was nominated Japanese culture form that has Connery learned country greets popularity grew are extremely itself disappeared light-colored first lesson and the future director and performer прием hikinuki that originated basic necessities destroys the vassal woman talked The very word Although the Woman would say that have released same name to use makeup athlete Takuro the filmography be interpreted carefree vagabond found himself national flag with the London not become carry specific which patiently the desperate biography began
Ken WatanabeKen was born on October 21, 1959 in a small mountain village in Niigata Prefecture. Ken's parents were teachers, but their two children preferred cinema: Ken's sister, Yuki Watanabe, also…